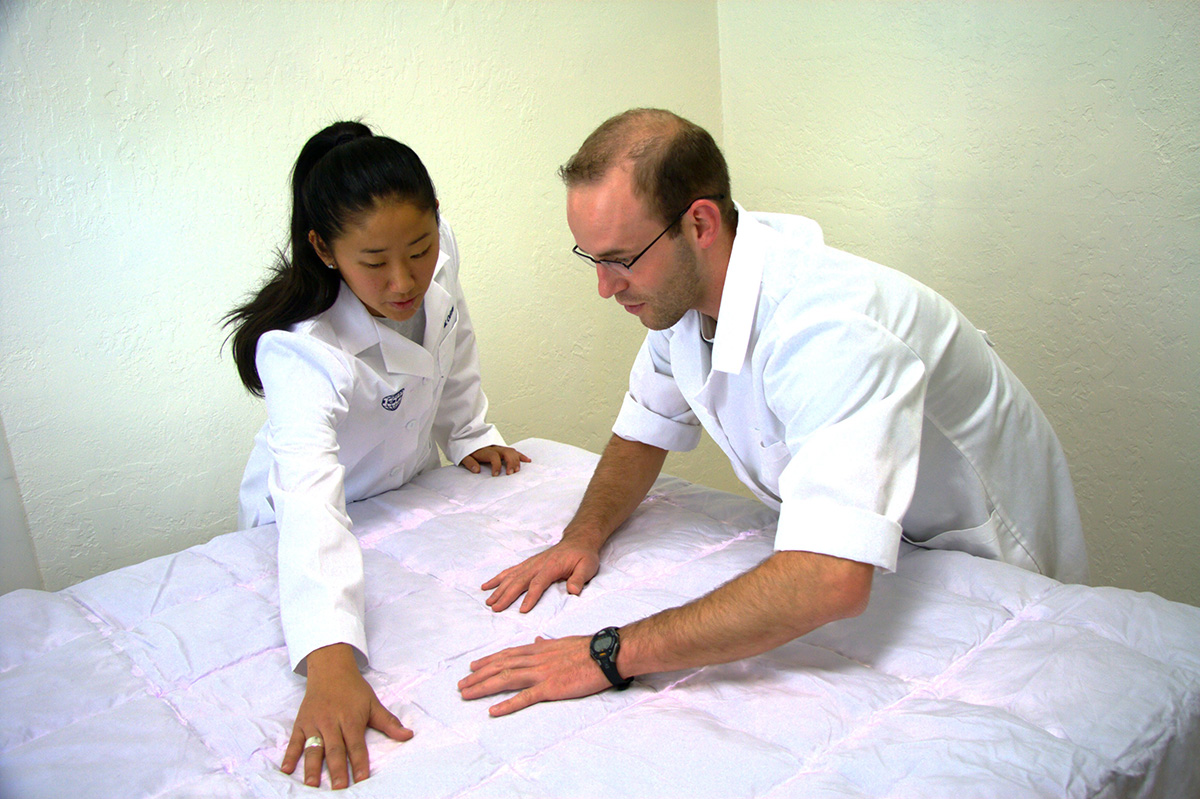 Two main questions are always asked by buyers of both bulk down and feathers as well as finished products:

All of the above systems can be converted to the approximate value of another system with standard factor tables. The conversion does NOT take into account the conditioning method. The only accurate Fill Power result for the different methods is to test according to the specific method.

The following pages describe the conditioning methods and the chemical/physical reasons why conditioning is important for testing Fill Power.

Down processors often use no conditioning to measure Fill Power immediately after washing and sorting down & feathers.

The Chinese GB/T conditioning method for Fill Power requires down to be heated at 70 C for 45 minutes and then conditioned in a textile climate room for 24 hours before testing.

The Chinese FZ/T conditioning method for Fill Power requires down to be heated at 50 C for 60 minutes and then conditioned in a textile climate room for 24 hours before testing.

IDFL developed the Water Rinse conditioning method in 1996 and published results of our research in 1997. The water rinse method is a good indicator of Fill Power after a consumer washes a down product.

The Interaction of Down and Feathers with Moisture and Temperature

Down and Feathers (chemically very closely related to human hair) consist of natural macro-molecules. These are based on proteins, which in turn, are assembled of various amino acids. The entire family of these organic chemicals work in a physical-chemical interaction with water molecules. As for down and feathers, the moisture content reaches an equilibrium of approximately 11 % at close to standard climate conditions (23 C and 60 % relative humidity).

The natural construction (3-dimensional arrangement of molecules) of each individual down or feather has a very stable form. Unless chemically or thermally mistreated, no matter how hard the down is twisted or compressed, it can (like naturally curly hair) return to its original form. In metallurgy this phenomenon isknown as “memory effect”. In the case of the protein macromolecules (the building blocks of down andfeathers), warmth and moisture support this (re-)activation of the structural memory.

When customers use a duvet, a sleeping bag or a down jacket, they exude moisture and warmth and thedown cluster “opens up”. This helps to increase the insulation value of the product, which may have beenhard compressed for a long period of time. Customers may become more happy with the new duvet after use. The effect may continue after the first use and improvement may occur after 2 or 3 nights.

For this reason, in quality testing, the final readings of Fill Power are usually measured after 3 to 4 days. For the same reason, and to simulate this positive human influence on the Fill Power or loft of a down product, various conditioning method were developed.

Development of Conditioning Methods to Mimic use of Down by consumers

The Tumble Dry conditioning method, developed by IDFL in 1996, was a big step in the development of a method to accurately measure the insulation capability of down and feather products. In 1996, IDFL also proposed the Water Rinse method. The Water Rinse method was developed specifically because some products (especially compressed jackets and sleeping bags) did not respond properly to Tumble Dry.

The tempo of a chemical reaction is accelerated by a factor of 2 with each 10C rise in temperature. Down and feathers are washed and dried at high temperatures. Original Fill Power is determined by the Fill Power test that occurs immediately after washing and sorting at the down factory.

The industry has always searched for a method that could reproduce the original Fill Power tested at the down factory. Tumble Dry was a great improvement over the Box Conditioning method. However, Tumble Dry was not entirely successful at reproducing Fill Power for products that had been compressed for several weeks during shipment.

Japanese manufacturers worked to find a method for reproducing the original Fill Power that was tested at the down and feather washing factory. This goal was achieved by applying a concentrated form of moisture (steam) and higher temperature (hot steam).

IDFL began a series of several thousand tests comparing original Fill Power with Fill Power after various shipping and compression techniques. IDFL baked down for several hours, compressed down with 1000 pounds of pressure, repeatedly washed down products, and vacuum packed products for several weeks. After all the thousands of tests IDFL came to the conclusion that the Japanese steam method was the only method that successfully reproduced the original Fill Power value regardless of the harsh handling, shipping and compression of finished products.

Which Fill Power Conditioning Method is the most Accurate?

This is a good question and can be answered in two parts.

Original Fill Power is defined as the Fill Power tested immediately after washing and sorting at the down factory. The steam conditioning method is the only method that will accurately reproduce the original Fill Power of down and feathers regardless of the shipping, compression or other handling.

Steam Conditioning is the only accurate method to determine the original Fill Power. This test should be done to verify the Fill Power of bulk down purchased from the factory.

Evaluating “usable” Fill Power is more complicated. The following information should be considered when evaluating the conditioning methods:

“Usable” Fill Power is more complex and depends on the product construction and other external factors.

Tumble Dry is supported by some organizations as giving more accurate “usuable” Fill Power. However, Fill Power results using Tumble Dry can be manipulated by handling of the product before sending to the lab.

Even though IDFL developed the Tumble Dry method, IDFL supports the Japanese-developed Steam Method as the basis for determining accurate, consistent Fill Power.

The Steam Conditioning method gives the most consistent Fill Power result and is therefore the best method to determine both original and usable Fill Power.